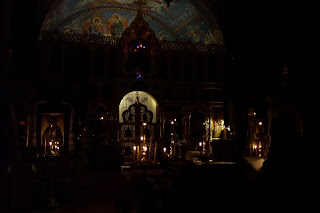 "...I walked down the 3 stairways, completely dark, to the equally dark cellar-tunnel. No need for a light, I know every step. Walk around the monastery cat's waterbowl on the corner, feel for the lightswitch at the boiler room door, and I can see again. I dig through boxes of old parts, and find the box containing new sealing washers for water faucets, and find the one that matches the worn seal in my pocket.

I look behind the boiler, and find father Flor's toolbox. 84 years old, He has not been the same since old father Myfodi died last year. No longer able to keep ahead of simple repairs, he often says, "it has only been broken for a year", and things remain broken. He is confused by Alzhymer's disease, and is angered if someone tries to do the work he once did. But he is Archimandrite, second only to Vladika here in the diaspora. So I quickly find the wrenches I need, and notice that he now absurdly wraps some of the wrenches in food-wrapping aluminum foil! Tools ars oddly, carefully arranged, I try to remember placement to avoid his wrath.