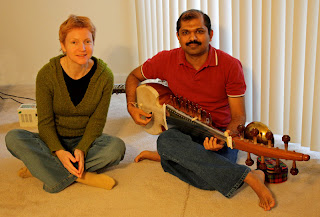 
We have visited Gaurang Doshi today in his home studio in Winston-Salem. Gaurang had a very nice concert in the library several weeks ago. I really got interested in his music. He plays sarod and sitar. Both instruments produce the sound that is very unique and out of this world.

Sarod has 25 strings, 15 of them are sympathetic strings for producing resonant sound. String resonate and sometimes even hit one another making that specific sounds that you won't find in any other instrument in the world. Not even human voice... Sounds awesome! Fingers go up and down the strings to produce the sounds (compare to a guitar where fingers go up, and the movement is wasted on the way down).

For plectrum Gaurang used a coconut shell :) He played for us sitting on the carpet in his living room turned into the studio. His instrument is very precious. The lower part of it is made out of goat skin. Main part is wooden, the space under the strings are metal, probably for resonance. Strings are so thin, so tender, almost like hairs. You can barely see them.

Gaurang was playing sarod, and time by time he was placing his fingers in the small round box to press on what appear to be a piece of cloth . I asked him what it was. He said that strings are harsh on fingers, and he uses oil to soften the skin.

And it was absolutely awesome that he has played for us! For the rhythm he used the electric tabla sound. It could go faster or slower; the entire thing has created the meditative experience. I loved it! Soon we'll have Gaurang's consert in Winston-Salem. "My father told me, - he says, - the best you can do for your teacher is start teaching". Gaurang revere his father who taught him how to play. Now his 11 years old daughter Anusha is playing sitar. He has students who come to his studio and use his instruments to learn how to play. 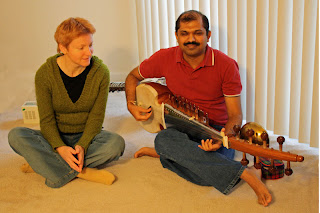