kayaking on the New river 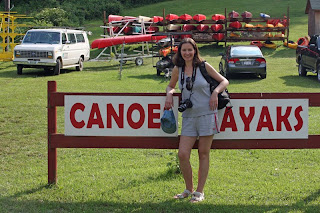 Nadia is ready (and clickable:)

We went to New River for kayaking. The day was perfect. It could not be any finer! New River is the oldest river in USA. It floats unusual direction, not like a river in the mountains suppose to. Seems that the river was here first, and then the mountains came up. New River made it's way here, in NC mountains, before the evolution got started, before the mountains were created :)

Despite its name, the river is considered by some geologists to be possibly one of the oldest rivers in the world, between 10 million and 360 million years old. According to local folklore, it is considered to be second in age only to the Nile River and thus the oldest in North America. The New River flows in a generally south to north course, which is against the southwest to northeast topology of the Appalachian Mountains. This peculiarity may mean that the New River's formation preceded much of the surrounding landscape.

We took a two-seater for $25.00 from Riverside Canoe that we found fairly easily using google maps (the drive from Winston-Salem took about 1 hr and 40 min). The guy with long waist length blond hair and Henry Thoreau attitudes took two of us up the river on the bus. His name was Scott. He looked like a computer programmer from Charlotte :) But he said he was born and lives in Jefferson, and that he enjoys the quiet life in the mountains very much. People here can stay and talk to you for as long as you keep talking. But when you done with your talk, you realize that they are actually quite busy :)

Scott put the kayak in the river. I asked Nadia whom she wants to be today - "a native" or "a scientist". She wanted to be a scientist and sat up front. I was "a native" paddling and doing the work so that the scientist can do the research and observations :) She actually did very well and saw a rare turtle!

The New River was designated an American Heritage River, one of only fourteen in the United States, in 1998. The New River is 337 miles long. Several rare aquatic animals make their home in the basin, including the bog turtle.

The river is so fast in some parts! In other parts it is very slow. The level is high because of recent rains, so we had no major difficulties going over the rapids. It was very enjoyable. I canoed on New river before. That time we flipped over to the amazement of cows on the banks - i lost my sunglasses, but didn't lose the paddle! This time we floated with the speed of the stream, just keeping the kayak going forward.

We passed by funny chain of people on tubes who got stuck on shallow waters. One daddy on the big tube was floating by himself along with two sons in the smaller tubes with "USA" proudly written on them. Daddy was teaching boys how to say really fast "The white background and the black background". I tried, and came up with "the white blackground" very fast :) 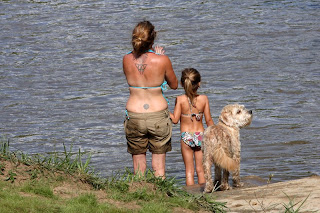 click to enlarge. All photos by Natalia Tuchina
Posted by nata at 11:43 PM

Jefferson isn't far from Boone. I love that area!! The New River goes right by my grandmother's house in WV. I can't wait to go in August! The rapids there are bigger than in NC!!