Those monks were on to something...

A Wandering Mind Is an Unhappy Mind


Science 12 November 2010:
Vol. 330 no. 6006 p. 932
DOI: 10.1126/science.1192439
A Wandering Mind Is an Unhappy Mind
1.     Matthew A. Killingsworth* and
2.     Daniel T. Gilbert
+ Author Affiliations
Harvard University, Cambridge, MA 02138, USA.
E-mail: mkilling@fas.harvard.edu
Abstract
We developed a smartphone technology to sample people’s ongoing thoughts, feelings, and actions and found (i) that people are thinking about what is not happening almost as often as they are thinking about what is and (ii) found that doing so typically makes them unhappy.
Unlike other animals, human beings spend a lot of time thinking about what is not going on around them, contemplating events that happened in the past, might happen in the future, or will never happen at all. Indeed, “stimulus-independent thought” or “mind wandering” appears to be the brain’s default mode of operation (1–3). Although this ability is a remarkable evolutionary achievement that allows people to learn, reason, and plan, it may have an emotional cost. Many philosophical and religious traditions teach that happiness is to be found by living in the moment, and practitioners are trained to resist mind wandering and “to be here now.” These traditions suggest that a wandering mind is an unhappy mind. Are they right?
Laboratory experiments have revealed a great deal about the cognitive and neural bases of mind wandering (3–7), but little about its emotional consequences in everyday life. The most reliable method for investigating real-world emotion is experience sampling, which involves contacting people as they engage in their everyday activities and asking them to report their thoughts, feelings, and actions at that moment. Unfortunately, collecting real-time reports from large numbers of people as they go about their daily lives is so cumbersome and expensive that experience sampling has rarely been used to investigate the relationship between mind wandering and happiness and has always been limited to very small samples (8, 9).
We solved this problem by developing a Web application for the iPhone (Apple Incorporated, Cupertino, California), which we used to create an unusually large database of real-time reports of thoughts, feelings, and actions of a broad range of people as they went about their daily activities. The application contacts participants through their iPhones at random moments during their waking hours, presents them with questions, and records their answers to a database at www.trackyourhappiness.org. The database currently contains nearly a quarter of a million samples from about 5000 people from 83 different countries who range in age from 18 to 88 and who collectively represent every one of 86 major occupational categories.
To find out how often people’s minds wander, what topics they wander to, and how those wanderings affect their happiness, we analyzed samples from 2250 adults (58.8% male, 73.9% residing in the United States, mean age of 34 years) who were randomly assigned to answer a happiness question (“How are you feeling right now?”) answered on a continuous sliding scale from very bad (0) to very good (100), an activity question (“What are you doing right now?”) answered by endorsing one or more of 22 activities adapted from the day reconstruction method, and a mind-wandering question (“Are you thinking about something other than what you’re currently doing?”) answered with one of four options: no; yes, something pleasant; yes, something neutral; or yes, something unpleasant. Our analysis revealed three facts.
First, people’s minds wandered frequently, regardless of what they were doing. Mind wandering occurred in 46.9% of the samples and in at least 30% of the samples taken during every activity except making love. The frequency of mind wandering in our real-world sample was considerably higher than is typically seen in laboratory experiments. Surprisingly, the nature of people’s activities had only a modest impact on whether their minds wandered and had almost no impact on the pleasantness of the topics to which their minds wandered.
Second, multilevel regression revealed that people were less happy when their minds were wandering than when they were not [slope (b) = –8.79, P < 0.001], and this was true during all activities, including the least enjoyable. Although people’s minds were more likely to wander to pleasant topics (42.5% of samples) than to unpleasant topics (26.5% of samples) or neutral topics (31% of samples), people were no happier when thinking about pleasant topics than about their current activity (b = –0.52, not significant) and were considerably unhappier when thinking about neutral topics (b = –7.2, P < 0.001) or unpleasant topics (b = –23.9, P < 0.001) than about their current activity. Although negative moods are known to cause mind wandering, time-lag analyses strongly suggested that mind wandering in our sample was generally the cause, and not merely the consequence, of unhappiness. 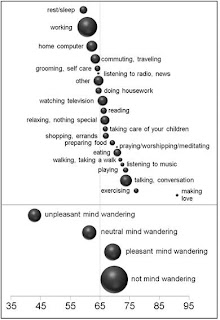 This is very insightful and has evidence to turn this from a theory to a social/emotional law! Ochen horosho Natalia,yest prekrasnyi Rozhdestvom!))